Honolulu-born violinist Patrick Yim is an active figure in Hong Kong’s contemporary music scene. The highlight of his solo recital programme, “Virtuosity”, will be the premieres of three newly commissioned works by Hong Kong composers Austin Yip, Kai-young Chan and Daniel Lo. Probing the topic of virtuosity, the concert also features iconic solo violin repertoire from the Baroque period to the present day by German, Italian, Finnish, and Belgian composers, showcasing the versatile colours and pyrotechnical possibilities of the instrument. A special treat of the evening will be the Hong Kong premiere of the Solo Violin Sonata by Ma Sicong, the most important and prolific Chinese composer of violin music.

At the second evening, the programme will focus on new works by Hong Kong composers. The composers will sit alongside the soloist and the audience to give a personal sharing session on their composition and offer an intimate encounter with the artists. 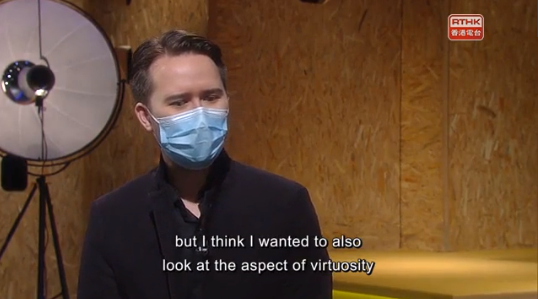 Recent performance highlights include a concert in Carnegie Hall with members of the Emerson Quartet, a collaboration with pipa virtuoso Wu Man in Lou Harrison’s Pipa Concerto, and a collaboration with Juilliard Quartet violinist Joel Smirnoff involving the premieres of two newly commissioned works.

He is a graduate with honours from the Cleveland Institute of Music where he was a student of William Preucil and David Updegraff and was twice awarded First Prize at the Institute’s Milhaud Performance Prize Competition. He earned his Doctor of Musical Arts degree from Stony Brook University where he studied violin with Hagai Shaham, Jennifer Frautschi, and Philip Setzer, and chamber music with the Emerson Quartet.

Award winning composer Austin Yip’s works have been performed worldwide. Recently collaborations and awards include Koto, a 30-minute site-specific work for Rosetta Contemporary Ensemble and Kyoto Art Center; Eurydice, an hour-long videodance collaboration with Centre de Vidéo Danse de Bourgogne, France; Metamorphosis, winner of the CASH Golden Sail Award in 2017, commissioned and performed by the Hong Kong Philharmonic Orchestra; and Road Business, a marimba concerto for Jack Van Geem, former Principal Percussionist of the San Francisco Symphony. Yip is a MacDowell Colony Fellow (as a Gardner & Veil Read Fellow), and his works are published by Donemus (Netherlands). He is currently a lecturer at the Hong Kong Baptist University. See more at austinyip.com.

A Hong Kong-based composer, Kai-Young Chan focuses on the integration of nuance, relevance, and resonance in music that converses with societies and cultures, and he is particularly drawn to the musicality of Chinese literature as expressed through the tonal Cantonese language. His music is performed around the world by the Pittsburgh Symphony Orchestra, Albany Symphony, Hong Kong Philharmonic Orchestra, Hong Kong Sinfonietta, PRISM Quartet, Daedalus Quartet, and Mivos Quartet, among other prominent performers. His selected works are released on Ablaze Records, PARMA Recordings, and Innova Recordings, with the scores published by Edition Peters (London).

Kai-Young is part of the first artist delegation of the American Composers Forum to the Havana Festival for Contemporary Music in Cuba, a historic tour documented by National Public Radio. His music is also presented on such international stages as ISCM World Music Days, International Rostrum of Composers, June in Buffalo, Internationalen Ferienkurse Darmstadt, among others. He completed his Ph.D. in Music Composition with the Benjamin Franklin Fellowship from the University of Pennsylvania and currently serves as Assistant Professor of Music Composition at the Chinese University of Hong Kong.

Daniel Ting-cheung Lo completed his PhD (Composition) at the University of York in the UK in 2017 under the supervision of Professor William Brooks, fully supported by The Hong Kong Jockey Club Music and Dance Fund. Previously, he studied composition with Dr Hing-yan Chan at the University of Hong Kong where he graduated with first class honours in 2009 and then earned an MPhil (Music Composition) in 2012.

One of Lo’s current compositional interests is to seek ways to integrate music with Hong Kong literature. Recent works inspired by contemporary local writers include two pieces written for Hong Kong Odyssey, commissioned by Hong Kong Arts Festival 2017; a choral work Mary’s Chalk Circle for narration, unaccompanied choir and video, presented by Hong Kong Voices in June 2017; and a chamber opera A Woman Such as Myself (based on Xi Xi’s short story “A Girl Like Me”), premiered in New Opera Days Ostrava (Czech Republic) in June 2018.

A staged cantata composed by Lo (based on Ye Si’s short story “The Banquet at el Bulli”) was presented by Hong Kong Voices in January 2020. Meanwhile, Lo and novelist Wong Yi are collaborating on a chamber opera in Cantonese Women Like Us, adapted from two of Xi Xi’s short stories A Girl Like Me and The Cold. The opera will be staged in Hong Kong Arts Festival 2021.